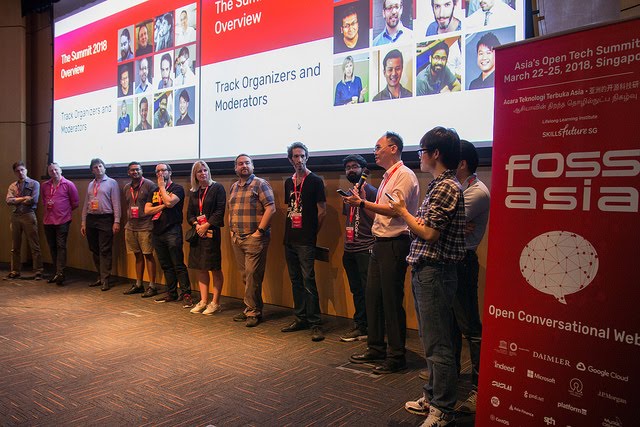 FOSSASIA 2018 was my 2nd FOSSASIA conference and this year it was at a new venue (Lifelong Learning Institute), and for a longer time. As always, there were a lot of speakers and a lot of really exciting sessions. Last year I was a little confused, so this year I planned earlier which all talks to attend and what all to do.

The opening ceremony was kicked off by Harish Pillay and Damini Satya, both of whom did an incredible job on hosting the entire day. The opening ceremony was followed by the keynote talks and a panel discussion which lent a great insight into how open source, AI, blockchain and all other modern day technologies are working hand in hand with each other. Harish Pillay also shared his view how he thinks AI won't take over the human beings but rather human beings will evolve to become something which is a combination of human beings and AI and hopefully have a good future. I do agree with him to some extent.
Hong addressed the audience stating the primary focus of FOSSASIA in the next few years and how it involves helping more developers get involved in open source and making new cool things. Codeheat winners were awarded next for their wonderful contributions in different FOSSASIA projects. The mentors of the projects were also honored with medals, which was kind of something I wasn't expecting. Then, it was time for the track overviews to help people understand and know what the different tracks were all about. We told what the tracks were and why the audience should be interested. With that, it was time for the most important track - The Hallway Track. So people talked and networked in the exhibition area for the rest of the day.

I was the moderator of the Google Training Day and also the cloud track in one of the rooms. Which meant getting up early, and reaching there on time. Fortunately, I made it on time (I still don't know how). Being the moderator, I was there almost the entire day. Which meant a lot of Google Cloud learning for me. So the talks ranged from using BigQuery to handle queries in big data to using Cloud ML to do Machine Learning Stuff. The Google Training Day talks were followed by a talk on serverless computing and tutorial on kubernetes. After that, it was again time to hang out in the exhibition area and talk with people. 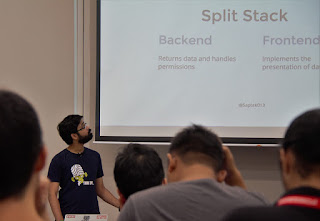 Today was the day of my talk. I was pretty worried the night before whether I would be able to make it to my own talk since it was at 9.30 in the morning. I did make it to my talk. But what was more surprising was, there were actually more people than I expected at 9.30 in the morning which was great. Apart from few technical glitches in the middle of my talk, everything went pretty smoothly. I talked about how we at Open Event decoupled the architecture to have a separate backend and frontend now and how it's really helpful for development and maintenance. I also gave a brief overview of the various architectures involved and the code and file structures.
After finishing my talk, I attended the SELinux talk by Jason Zaman. SELinux is a very confusing and mystified topic for most people and there was no way I was missing this talk. He gave a hands-on about setting up SELinux policy and how to use audit logs. Next was the all-women panel about open source and tech. After this was the necessary group photo where the number of participants made it a little too difficult for the photographer.
The remaining of the day was pretty involving where I mentored in the UNESCO hackathon, helped with video recording and so on.

The final day of the event. I was really interested in attending the talk about Open Source Design by Victoria and hence reached the venue by 10 am in the morning. It was a great insight as to how Open Source Design is involving and bringing in more and more designers into open-source which is really great. The last session I was eagerly waiting for was the GPG/PGP key signing event. Had a lot of fun helping people create their first GPG/PGP keys and signing. Met and interacted with some really awesome people there. 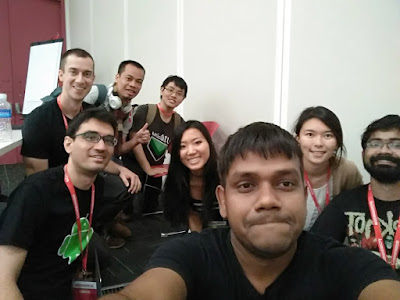 At last, it was time for the conference closing ceremony. But it wasn't over yet. We all met over at hackerspace where I had some great discussions with people about the different projects I work on and was really great to have their views.
All in all, it was really great meeting old friends, making new friends and meeting people whom I actually knew only by their nick. More than the talks in itself what makes a great conference is the people in it and the chance to meet them once in a year. At least that's how I see them. And FOSSASIA 2018 met that purpose wonderfully.